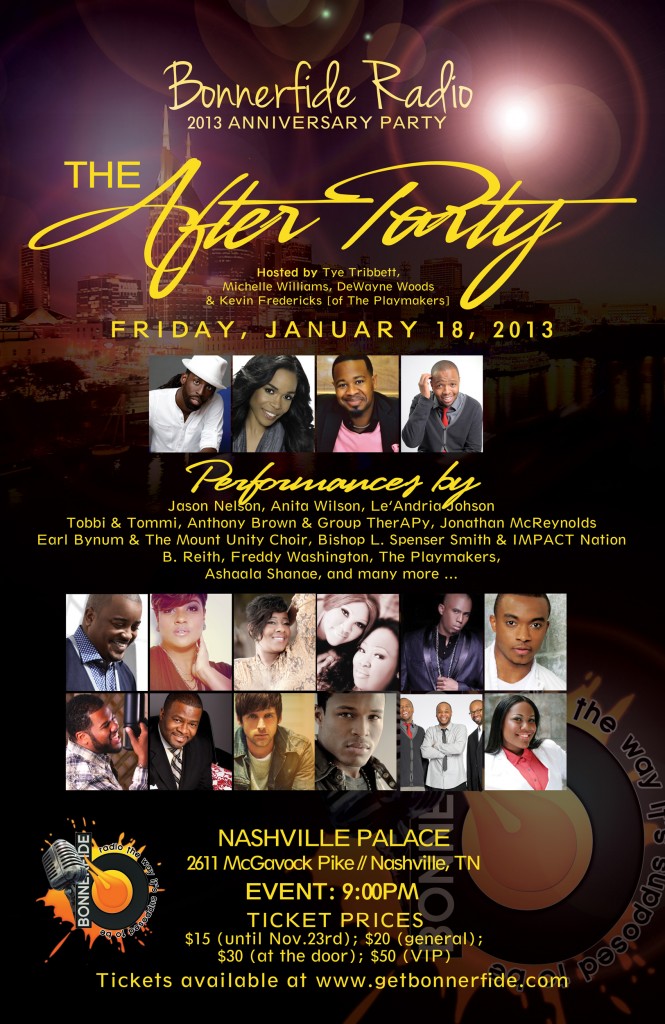 One of  THE  most celebrated events of Stellar Award weekend returns as Bonnerfide Radio presents the 2013 Bonnerfide Radio Anniversary Party!! Yearly, this event fuses the best in live music and entertainment with the industry’s most passionate music lovers for an experience that is second-to-none.

Newness is in the air as this year’s event heads to a new venue and celebrates new accomplishments. For the first time ever, the Anniversary Party heads to the “World Famous” Nashville Palace on January 18, 2013 in Nashville, TN. Bonnerfide Radio celebrates its unprecedented fourth consecutive Stellar Award nomination, this time in the brand new category of “National Radio”, which features the best in internet, satellite, and syndicated radio.

The 2013 presentation of  The Anniversary Party is being dubbed “The AfterParty”.  Much like “The AfterParty” that airs daily on the station, it is certain to produce some of  THE most unpredictable and exciting moments of the entire weekend.

Guest hosts for the event include Tye Tribbett, Michelle Williams, DeWayne Woods, and Kevin Fredericks (of The Playmakers).

Don’t miss one of  THE biggest parties of 2013. Join us for “The AfterParty!”

For tickets go to http://www.bonnerfideradio.com/press/the-2013-bonnerfide-radio-anniversary-returns-to-nashville/

SHE SPEAKS WELLNESS: You Are the Hero of Your Own Story

When You Look at the New Year-Are You Ready?

Correction To A Story in our November/December Issue: Children’s Books Author Aaris Epps