(Austin—Texas)  If you love chocolate and you love art, then you don’t want to miss the Third Annual “All Chocolate Affair” taking place Sunday, April 21, 2013, at the Carver Museum & Cultural Center, 1165 Angelina, Austin, Texas.  The event will feature a sampling of savory and sweet treats and chocolate showcasing the artistry of seven high school culinary programs which represent six Central Texas school districts and culinary demonstrations by Austin Community College. Tickets to the “All Chocolate Affair” are $35. The event is sponsored in part by Central Market, YNN and CultureMap.

This year’s event will once again be hosted by Austin food critic, Rob Balon, and will feature live music by “The Voice” contestant, Tje Austin and violinist, Robin Burwell.  The inaugural brownie competition will be the Texas Brownie Bowl, and each school will bake a uniquely flavored brownie to be entered into this contest.  Local celebrity judges will select the winner of the best brownie in Texas.

Chef Rob McDonald, Culinary Arts Instructor at the Travis High School Institute of Hospitality and Culinary Arts said, “We are excited to be working with the Austin Community College on culinary demonstrations and educational resources that will give real world experience to the students.  Partnering with Broadcast Your Love is great because we share the same goal of making a difference in the lives of young people.”

BYL was started by family and friends of local broadcast journalist, Thea Williams-Douglas, who lost her year-long battle with breast cancer in 2010.  Williams-Douglas dedicated her life to making a difference in the community by mentoring youth and working to encourage those in disadvantaged neighborhoods.  Marcía Williams, Williams-Douglas’ sister, said, “Thea was and still is a powerful force who made a difference both in her children’s lives, as well as in the lives of others. We are committed to moving forward in a way that will both honor her spirit and give back to those Central Texans in need.”

Broadcast Your Love is a 501 (c) 3 under the fiscal umbrella of the Austin Community Foundation.  The financial support and awareness generated by the All Chocolate Affair will help BYL in its mission to inspire healthy living through positive communications skills, self-awareness, and resiliency in youth and women in underserved communities.  For information, visit http://www.broadcastyourlove.org. 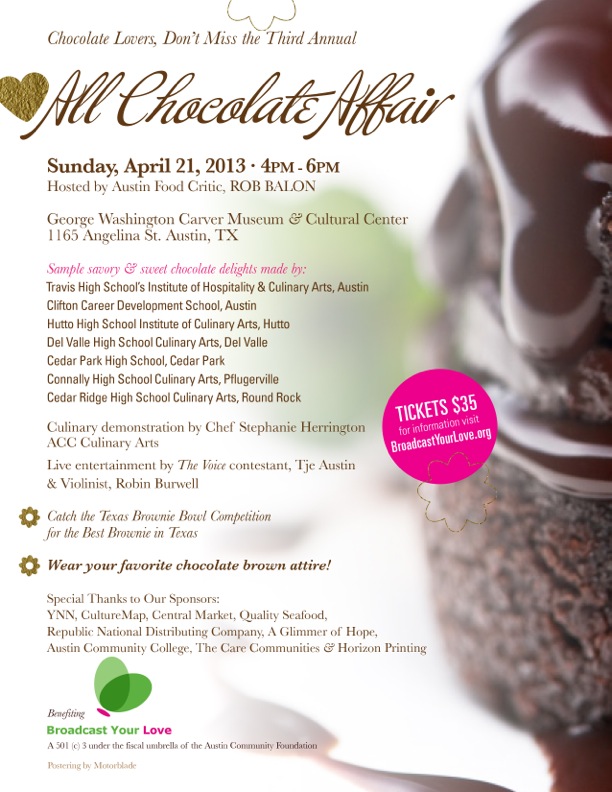 Viewpoint From the Editor-in-Chief

There Will Be A Celebration of Juneteenth in Austin, Texas!!