Inspired by San Francisco’s long-running Lit Crawl and produced with their participation, the 2015 Lit Crawl Austin will include: Balderdash, the always-popular YA ghost stories in the Texas State Cemetery, tales about personal fiascos, Nerd Jeopardy, a LGBT storytelling showcase, Literary Death Match, Whose Line Is It Anyway, Lit Crawl Against Humanity (a literary version of the popular game Cards Against Humanity), a coloring contest (with cocktails) for adults, and more.

Co-organizers Jill Meyers and Steph Opitz weigh in. Meyers says, ‪”Lit Crawl this year is going to be insane (in a good way), in celebration of our fifth year in Austin. From spooky ghost stories for all ages in the Texas State Cemetery to R-rated Lit Crawl Against Humanity games—and everything in between—we’ve got it.” Opitz adds, “By day Texas Book Fest authors will talk thoughtfully about their latest books, by night they’ll hit up the east side for literary-ish shenanigans.” 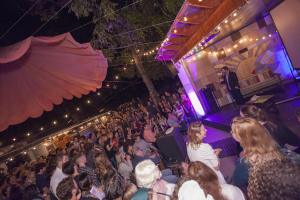 Taking a cue from a certain game show, this event will pit your favorite writers against one another in a test of literary knowledge and general chutzpah. Hosted by Ryan Chapman, author of Conversation Sparks: Trivia Worth Talking About. With authors Sloane Crosley, Austin Grossman, and Viet Thanh Nguyen.

Join authors Antonio Ruiz-Camacho, Andrew Ervin, Mary Helen Specht, Téa Obreht, Mia Alvar, and Dan Sheehan for a rousing game of Balderdash, where they’ll attempt to trick you into thinking they know what they’re talking about when it comes to this whole words thing.

Authors Brin-Jonathan Butler, Heidi Julavits, Rebecca Makkai, and Manuel Martinez bare all with true-to-life tales about a personal fiasco. Want to hear your favorite writer in his most fumbling moment, in the midst of some accidental shenanigans? Now’s your chance.

You’ve been missing something in your life. You tried to fill the hole with a truck, a sweetheart, a breakfast taco. You know all the bands and all the clubs. Why aren’t you whole yet? Because you’ve never heard these poets. Come fix that. Sponsored by Sasha West and Sorin Oak Review. With authors Ariana Brown, Tomás Morín, Paul Otremba, and more.

Slice Literary presents a short story stitched together by writers Marisa Marchetto, Sarah McCoy, Keija Parssinen, Neal Pollack, and Sung J. Woo. How the exquisite corpse game works: One person writes the first few paragraphs. We send the final line of those paragraphs to the next writer, who continues the story. Then the writers come together to read their collective tale, without knowing where it began or where it will end. 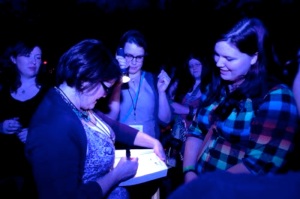 Three authors tap in and out of one another’s readings. Enjoy the juxtaposition and collaboration of this literary mash-up presented by Bat City Review. With authors Jynne Dilling Martin, Benjamin Percy, and M.O. Walsh.

The future is a raw, beautiful machine, brought to you fast and fabulous by authors Matt Bell, Kelly LInk, Lincoln Michel and Laura van den Berg, and Gulf Coast. Expect words to dazzle and games to delight.

Gripping, eerie, and spooky tales from a raft of YA stars. This event is for all ages. The cemetery can be dark—bring a flashlight! With authors Jake Halpern, Stephen Graham Jones, Peter Kujawinski, Nova Ren Suma, and April Genevieve Tucholke.

Every emerging writer needs a strong catapult. Three established authors share short odes to the mentors who propelled their careers forward and then introduce a favorite future lit star. A night of signal-boosting, tequila, and bookish camaraderie. With authors Geoff Dyer, Sarah Hepola, and Jonathan Lethem.

Come join us for a night of dialogue as authors read from works that best highlight their gift of the gab. “It’s your move. . .

One thought on “Are You Ready for the Texas Book Festival?”