I was invited to a back to school bash that was presented by the River City Youth Foundation. It was a great time for parents and children to socialize and learn about services available to the community. I was especially excited to hear a young family band of siblings. 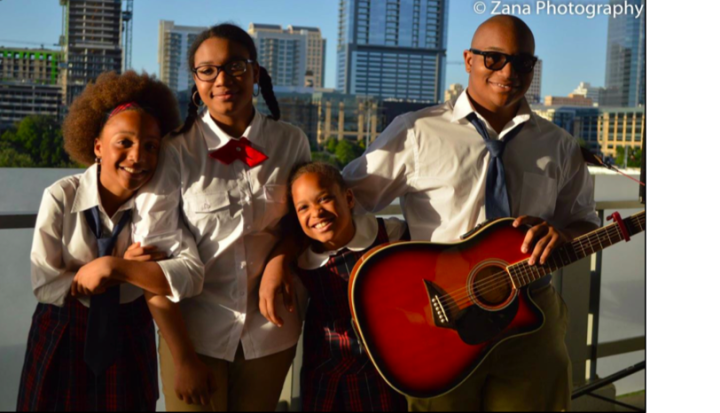 The Mitchell kids’ band name is a nod to Christopher Yee and Jessica Gonzales, the band directors at Four Points Middle School where three of the four members of WDRL attended before transferring to a local charter school.  Upon entering the FPMS band hall, the average visitor immediately notices the plethora of toy stuffed llamas, gracing nearly every flat surface in the room.  But if one dares to ask, “What’s with all the llamas?” the immediate and persistent response is, “What llamas? We don’t see any llamas.” >wink!< >wink!<.

When coming up with a band name, the Mitchell kids determined that many of their favorite bands had memorable names that ran five or more syllables long, including but not limited to: Of Monsters and Men, The Doobie Brothers, Everything But the Girl, Blink 182, The Red Hot Chili Peppers, and Two Door Cinema Club.  Keeping with the 5-syllable-minimum-rule and wanting to incorporate llamas, it was only a matter of time before We Don’t Ride Llamas was offered up and accepted. Runners up were Set Phasers to Stun and Blind and Crying Drunks. Parents, Mykel and Sheeri, would have accepted the former, but were prepared to veto the latter.

Seniors and The Importance of Balance