If you are a new entrepreneur or you been in business for a while, you have heard about the importance of networking. There are people that find networking to be intimidating and difficult to master others find to be an open door to connecting to new people and prospects. The bottom line is if you do not network, at some level, your business will not grow or prosper to its potential. I sat down with Anthony Abron – The Magnetic Networker™ to discuss his upcoming telesummit and the world of networking. 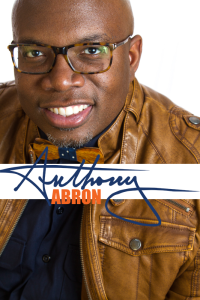 I left transportation and Logistics which I had done for the previous seven years. I was not happy. I knew it was more and what I was doing was not it. I knew the creator wanted him to use his voice, so I became a Voice-over artist.

I attended a networking event and before a hundred people I was asked what do you have? Tell us about your business? I spoke. They listened. And at the end they were in awe. They surround me wanting my business card and my website. I did not have either because I just jumped out on faith. It was the beginning of where it started.

I began to study and research people and took what I learned personally. With no money, my business grew through word of mouth. I began to see the power of networking. I realized that networking is a skill set that no one is teaching. In having a business it is important that you network. I help people understand it is a matter of getting comfortable when you know the steps and you can stay within your lane. I can help people because it is my own journey.

I look at my mother who knew a lot of people but she did not understand networking. If she understood it I often ask myself where would that have put us? My father understood it and I’m taking that information and teaching it to others. I want to teach this skill set nationally and internationally. When you understand the history of our nation, the good of boys club that is all networking. It is also the great equalizer. Sales and networking are the great equalizers in business. For our people it is economic empowerment. Most people want to be Michael Jordan but don’t want to dribble. Networking is the fundamentals, the basics. For instance, Oprah is a master networker, every time you see her show she is showcasing who she knows.  A lot of people have networks but you have to understand their is knowing people and then there is your network.

The telesummit is myself networking and showing others how to network by showcasing all these individuals that come directly from my network.

What Will People Get From The Telesummit?

Six unique stories of people who are “rock stars” in their individual areas and how networking impacted their success. They are doing well locally, nationally and on a global scale.

Tena Pettis is a social media expert and accomplished speaker + trainer on all things social.

Kevin Rogers is one of the most in-demand sales consultants online, working closely with high-volume information marketers, corporations and local brick and mortar businesses alike to turn around sluggish ad campaigns.

Tina Torres is CEO and Founder of SHE DID THAT weddings and events and gracefully leverages effective networking as a way to not only service the needs of her compounding list of clients but to further the philanthropic efforts of her non-profit agency, SHE DID THAT Community Development Group.

Stacy Wallace is the Warrior Princess She has shared the stage with 5 U.S. Presidents, Colin Powell, General Norman Schwarzkopf, Margaret Thatcher, Zig Ziglar, pro-athletes, and many other high profiled leaders of our generation.

From this telesummit, you will connect and have access to these presenters through networking. It will open doors for you and your business. You will gain something from this event.

The Live Event: Wednesday July 15 12 noon and 8pm. It will be  three days, two speakers per day.
Please visit the website www.NetworkLikePros.com for more details on the schedule.

How To Get More Information:

You can find Anthony Abron – The Magnetic Networker™ at https://networklikepros.com/telesummit, and Twitter @solsquad512