The History of Juneteenth

The history of June 19th, also known as,  Juneteenth, is important to remember as we gather to celebrate this coming weekend.

Juneteenth is also called Emancipation Day and Freedom Day. The reason we celebrate is due to the last slaves being emancipated. The announcement that slavery had been abolished made it to Texas in June of 1865.

President Abraham Lincoln issued the Emancipation Proclamation on September 22, 1862, with an effective date of January 1, 1863. However the news did not reach the South until May 1865. On June 19, 1865, standing on the balcony of Galveston’s Ashton Villa, Granger read aloud the contents of “General Order No. 3”, announcing the total emancipation of slaves:

“The people of Texas are informed that, in accordance with a proclamation from the Executive of the United States, all slaves are free. This involves an absolute equality of personal rights and rights of property between former masters and slaves, and the connection heretofore existing between them becomes that between employer and hired labor. The freedmen are advised to remain quietly at their present homes and work for wages. They are informed that they will not be allowed to collect at military posts and that they will not be supported in idleness either there or elsewhere.” 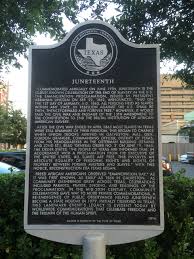 Juneteenth is celebrated as a state holiday in most places. In most communities you will find parades, vendor events, speeches, and family activities involving music and food. A full day of remembrance and celebration of our ancestors being granted their freedom is the pride of the day.

Activities You May Want To Attend…

On June 18th the following events will take place.